Archive for the ‘The Power of Camp’ Category

Are We Accomplishing Our Mission? Beyond Anecdotes.

Over the last few years Bethany Birches has been committed to partnering with academic organizations researching the benefits of Christian Summer Camps. Last year the Hope Study (University of Oklahoma) measured whether campers experienced increased hope as a result of their camp experience.  The Hope Study 2018 found “The results of this report continue to provide support for the positive impact the participating Christian camps are having on the boys and girls attending those camps, not just in terms of Hope and Well-Being, but also in social connectedness and interest in their Faith.” Fifty-six percent of campers had increased hope scores after coming to camp. This was most closely correlated with making friends and having developed some faith.

This year The Power of Camp study (POC) has given us preliminary data about campers’ engagement with faith, relationships with peers, and connection to staff as a result of their camp experience. Based on early data from this summer all of the parents surveyed said their child made friends at camp and 67% of campers said they were strengthened in their faith. Only 24% of parents reported reading the Bible with their children and 87% of parents felt we were “effectively teaching Christian faith.” All of the parents surveyed said they would send their child back to camp and 90% of campers ranked “the entire camp experience” as their most enjoyed part of camp. The initial data we have received from this summer is very encouraging and points toward significant mission accomplishment. We are excited that 100% of parents surveyed were pleased with our “system of addressing bullying/ conflicts.” We see Jesus’ teachings of “Love your enemies” and “treat others as you wish to be treated” in this statistic. 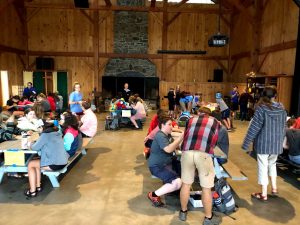 2019 was the third summer in a row in which our seasonal staff participated in The Power of Camp.  POC was conducted by Wheaton College looking at how staff of summer camps are affected by the experience. We have received data specific to our staff’s experiences and are able to compare this with the average of camps participating in the study. Participating in these studies allows us to quantitatively identify our areas of strength as well as opportunities for improvement. For example, between the 2017 and 2018 staff studies we saw a significant increase in how staff felt supported by their supervisors. We improved from being on par with other camps with a 4.1 out of 5 rating to a 5 out of 5 average rating from the staff. Also improving in the same period were the percent of staff who experienced growth in the teamwork and emotional intelligence areas assessed by the study. These and others had been identified as areas for improvement by camp leadership and the following year increased by 22.5% and 21.5% to be on par or higher than the average camp in the study. Between the summers 2017 and 2018 we improved parts of staff training, intentionally sought ways to provide more support for staff, and had better and more frequent meetings to improve communication. These improvements have been continued this last summer and we look forward to the forthcoming 2019 research study results. 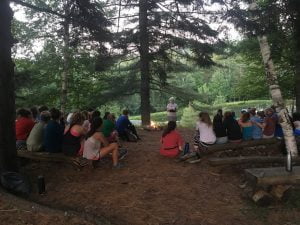 It is encouraging to have data to inform our decisions and confirm what we are doing is consistent with our mission. We were able to see that staff was improving in areas of spiritual growth, leadership, and resiliency similar to other camps and pinpoint what we could improve the next year. We feel both affirmed by the research and able to identify potential areas for improvement next year. We will continue pursuing these research opportunities because they have been and will continue to be part of making Bethany Birches Camp better at achieving our mission to help young people develop their relationship with God.

It is challenging to gauge success when trying to accomplish a mission like Bethany Birches’.  We do some surveys after summer and winter seasons to see how we did in a couple different areas.  I just LOVE what came from the surveys this past summer.

“They both came home singing great pre-dinner songs like, “thank you God, for giving us food!!!!” We loved learning these songs and still sing them before meals! They also learned about how to be a good friend, and how to work well with others. They learned how to do their own dishes which made me very happy!”

I think that part of the reason most campers loved it here last summer (ratings of 8, 9, 10) is because they felt loved, accepted and cared for (fun, great people and great activities didn’t hurt either!).  “Proof” that we are creating the type of atmosphere required to accomplish our mission.  I also take great encouragement knowing that half of the parents surveyed said their children “seem more loving or kind.”  This reminds me of Jesus’ teaching to love God and to love people.  We must become a person filled with God’s love and love for those around us to accomplish this.  If parents are noticing their children becoming “more loving or kind” I bet it’s because what happens at camp is helping people live out this teaching of Jesus and develop a relationship with God.

The Power of Camp: Friendships 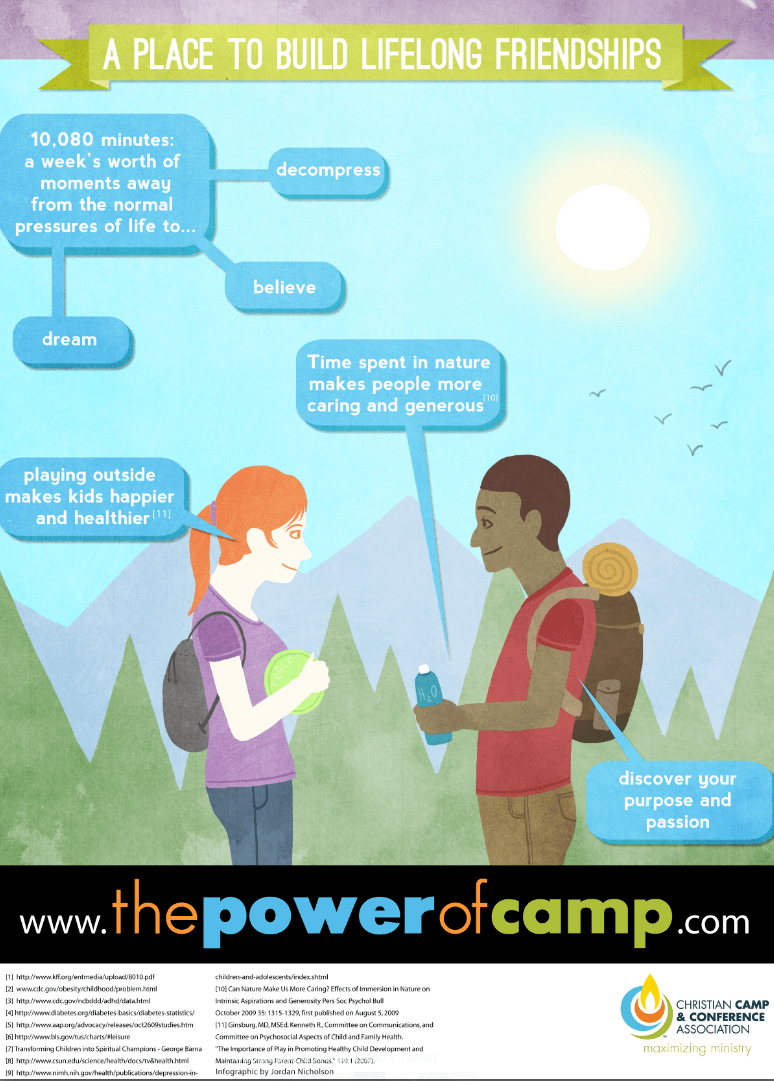 Why Camp Has To Be Challenging

This is an excellent article from American Camp Association!

In summary, it promotes the fact that at the heart of camp are the things that build up people.  Hardships. Failures. Homesickness.  I would add, fun, relationships and the outdoors go a long way in this building of a person.

You simply must read this article:

This post is about money and time.  These are two scarce resources.  By the end of the post, I hope to have made a great case for why you might like to accept my invitation to come and give time to camp, or give money, or both.  In the giving of these two scarce resources, you will be happier!

I stumbled upon two blog posts this past week, both dealing with the data that shows giving things away (especially money and time) make people happier.

One post was sent to me by my brother (thanks Bryce).  It’s here.  In it, author Arthur Brooks writes:

In 2003, while working on a book about charitable giving, I stumbled across a strange pattern in my data. Paradoxically, I was finding that donors ended up with more income after making their gifts. This was more than correlation; I found solid evidence that giving stimulated prosperity.

Psychologists, I learned, have long found that donating and volunteering bring a host of benefits to those who give. In one typical study, researchers from Harvard and the University of British Columbia confirmed that, in terms of quantifying “happiness,” spending money on oneself barely moves the needle, but spending on others causes a significant increase.

I have seen this over and over again. I’ve been working for Bethany Birches for 10 years now.  One of my primary responsibilities is to reach out to supporters and would-be supporters and share the power of camp with them.  It’s amazing. When people are here, at camp, they meet and impact young people.  Often they catch a vision of a better world.  They are inspired to adjust aspects of their own lives, encourage young people and give to the camp.  It’s magical… or perhaps a better word is mystical.  Mystical is a better word, I think, because it makes room for the possibility that in this process of relationships and service (giving of ourselves and our resources), God enters.

Here’s the problem with all this.  It sounds suspicious.  Until you experience the joy that comes from giving your time and money away, especially to those who need it (like young people at camp), you can’t quite believe that it can provide meaning and happiness.

Won’t you give it a try?

Give Money     Give Time

Summer 2013: #WithGod All Things Are Possible

Mission Possible All Around: #WithGod all things are possible…

…#WithGod BBC created a new week of camp this summer: Mission Possible week. Campers were invited on a week-long mission to prove BBC is achieving its mission. Campers participated in the traditional version of their favorite game multiple times and were surprised with MI versions adapted especially for this first time BBC program…

…#WithGod BBC created a new program this summer dedicated to teen campers who want to be at camp more than one week of the summer. Mission Possible Crew week allowed 14-18 yr old campers to come to camp to help with clean up and program while continuing to enjoying the perks of camper life. BBC Crew campers enjoyed setting up and guarding for Mission Impossible games. One crew member enjoyed it because “we got to help make the campers time at camp better while having fun at the same time!” (Erianna, ’13 Crew Member)

…#WithGod BBC is working towards a new pavilion. Each Friday night campers shared with their parents various reasons why camp needs a new pavilion. Mission Possible: The Pavilion Project is building momentum with 1.2 million of the 1.8 million dollar goal committed.

It is hard to believe that the holiday season is already fast approaching. It feels like it was just a few weeks ago that my husband and I were bringing our girls to camp for teen week; now we are planning for their return for the first Teen Connect weekend. Time moves quickly and with our Pavilion Project slated to break ground next August, the board has been busy overseeing preparations for this to happen on time. We are currently in the process of selecting a construction manager to coordinator the day-to-day activities of the project. As Bethany Birches moves forward on this major undertaking, the board is mindful of the need to do this with minimal impact on our ability to continue the main mission of the camp – providing all children with a place to find God. We are also well aware of the importance of the old pavilion in so many people’s lives. Plans are being considered for an event next summer to pay tribute to the building that has been an important part of BBC for so many years.

Having not been a camper at Bethany Birches as a child, I enjoy any chance I have to be a small part of summer activities. This past summer, I had the opportunity for a second year to assist with medication drop off during registration. It is amazing to see what a well-oiled machine BBC is when it comes to welcoming campers. It was fun to be there to watch the staff interacting with campers and each other. I understand why my daughters love to come to camp. It is also wonderful to see how my girls bring camp home with them. This summer, in fact, they took BBC abroad. My daughters, Katie and Annie, and their friend (and fellow BBC camper) Flossie traveled with me to Ethiopia. Bethany Birches traveled with us in many ways – music, stories, Dutch Blitz and, literally, the clothes on their backs. In each of their suitcases, there must have been at least 2-3 articles of clothing that came from BBC. All of these pieces of camp are literal reminders of the knowledge that God surrounds them and stays with them wherever they go. 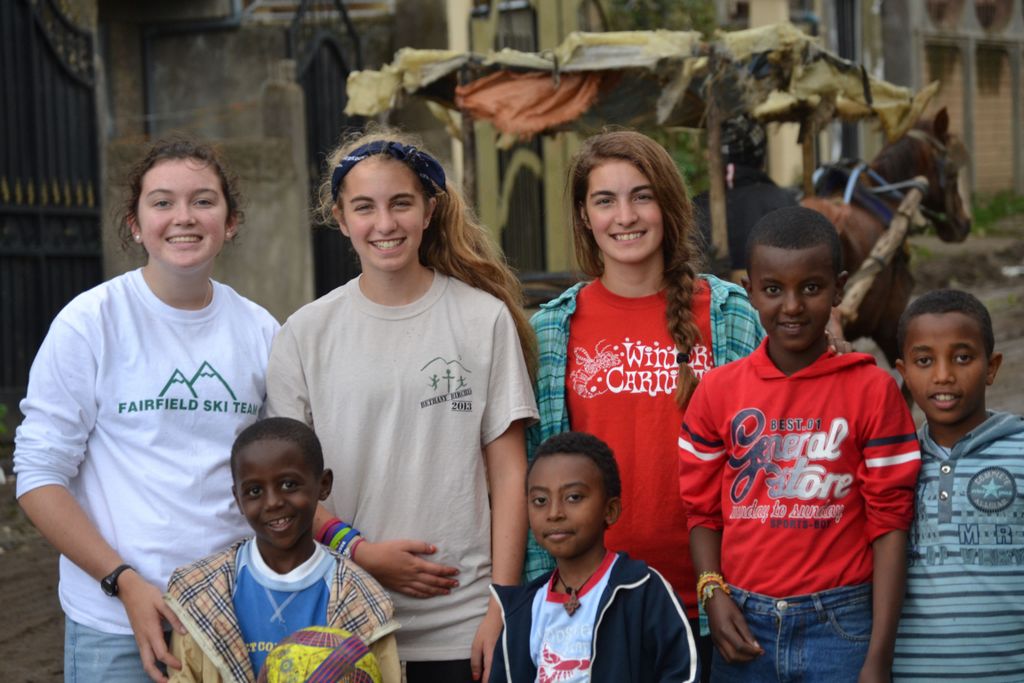