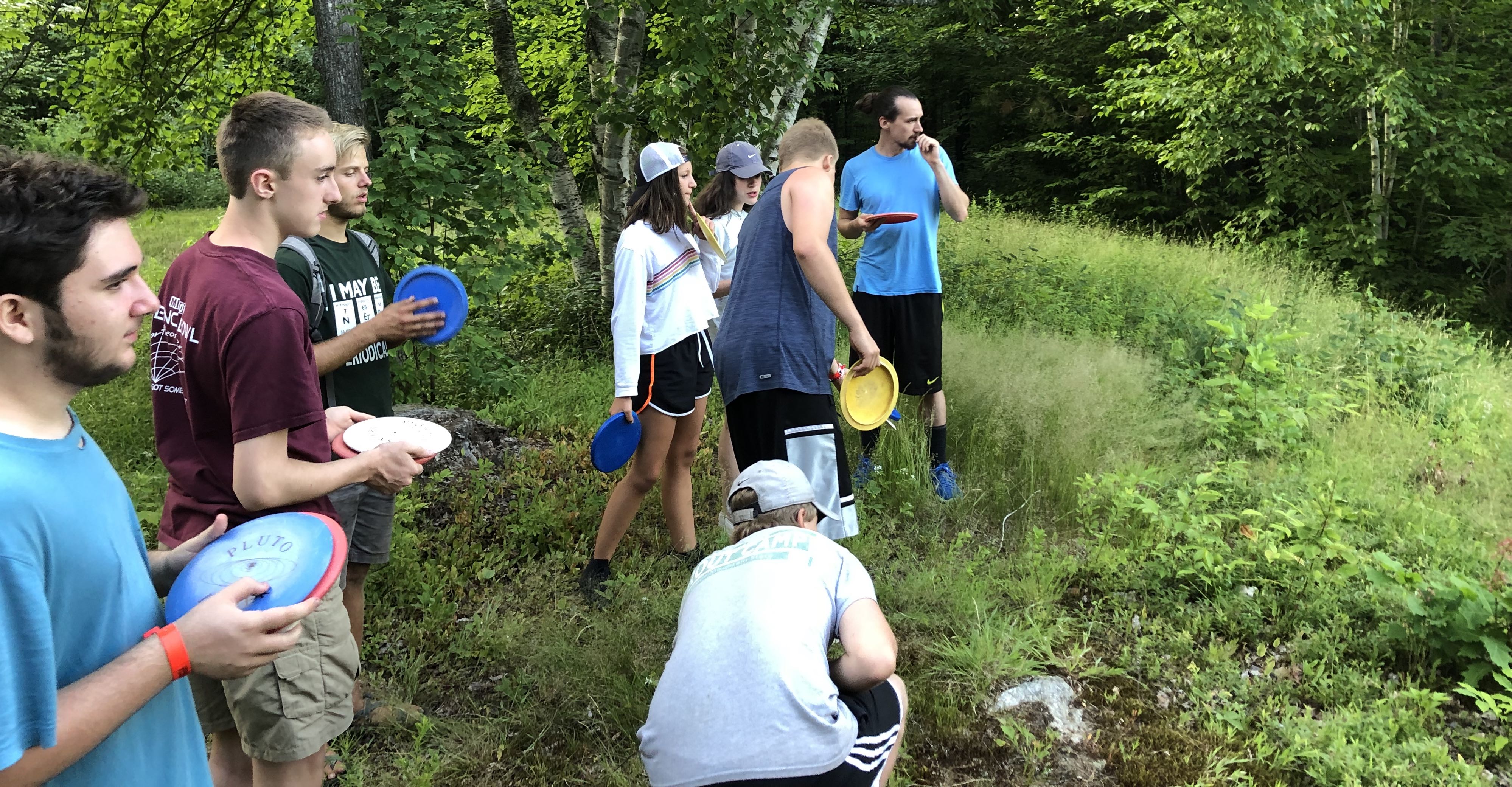 Leon and Rupert Try The Way Of Jesus Together

The other week I returned to the adventure that is counseling at Bethany Birches Camp. I left the routine of my job as the facilities manager and once again became Counselor Rupert. Our cabin group that spent the week in Robin all arrived together on a bus and were part of the Camp Agape program. I didn’t know who was going to be in my cabin until I walked into the pavilion and saw six middle schoolers and Wade, a long-time Agape volunteer, waiting at a picnic table. We marched down to Robin, bags in tow, and moved into our home for the week.

The children who are part of Camp Agape have experienced the incarceration of a parent. Most children who experience the loss of a parent have extra hardship in their life. Some of my campers that week used harsh language towards others, told crass jokes, and tried to get ahead whenever possible. It seemed that some of them felt that whoever was physically, emotionally, and socially superior could get others to do things for them and was the top dog.

Monday afternoon during rest time all six campers fell asleep. After the 30 minutes were up two of the campers wanted to go on sleeping. Wade and I got them to get up and go onto the next activities, but by the end of dinner, which took place at another cabin, they were asking to go to bed. I was glad we decided to break from the schedule of games, songs, and activities and Wade took them back to the cabin, because those two boys slept over twelve hours straight through to breakfast the next morning. I don’t know what their lives were like the week before camp, but in the solitude of the Robin cabin, down the hill surrounded by trees, they were able to rest.

One camper, who I’ll call “Leon,” was obsessed with the concept of being the “alpha male.” To him this meant being the superior in a way that allowed him to protect others and also meant he could get others to do things for him. He went about this by declaring feats of strength and challenging other campers in the cabin, boasting about his prowess if he were to get in a fight with someone who might try to harm him or his friends (he often would refer to the other boys in the cabin as “my men”), and by talking about the different girls at camp he was talking to. It almost seemed like a more primitive or tribal way of approaching relationships with others. Leon was never the butt of jokes and always could get others to do his dishes or carry things to and from the cabin. I often had an image of a great lion who lazed about while the rest of the group did everything and could only be bothered if some threat needed to be chased off.

At the beginning of the week I wasn’t sure which approach would be best for working with this cabin of boys. I didn’t think I could change who they were with a few words and explanations and I was pretty sure they wouldn’t respond well to loss of privileges and multiple trips to the director’s office. I made sure they were safe, didn’t harm each other, and kept the insults to each other as in check. I tried my best to take care of any needs they had. I listened when they spoke and asked questions when I could. I had this idea that if I could be an example of a way to act they would see that it was a better way to live and pick up a few things.

I was trying to follow the way of Jesus. I was trying to lead by serving, build up the people around me, and produce good fruit. The way I was acting seemed to me to be a sharp contrast to many of the behaviors of my campers. I tried to live into what I wanted to believe and told the campers why as I did it. I wanted to treat others as I want to be treated, I spoke calmly and respectfully, and I told them that in order to lead others you must serve them. I hoped the campers would see that how I lived was more life-giving, and also ask what was the source of my motivation.

By the middle of the week, I felt tired, used up, and I wasn’t sure that what I was doing was making any difference. I was questioning if I should have started the week off differently by enforcing strict rules about language and behavior. I was annoyed at all the little things the kids did to each other and how hard it was to get them to do anything helpful. I was worried that one of the campers would hurt themselves, each other, or a camper from another cabin. Wade was only able to volunteer until Tuesday morning and I immediately felt his absence. I felt I wasn’t living up to expectations.

I found myself doing a lot of praying. I prayed for strength. I prayed for my campers. I prayed for guidance and assurance. I realized that although I pray often I don’t expect my prayers to be answered. I usually ask God for help, strength, or to work in others, and then I continue on expecting to be able to do it on my own. I got to a point where I needed God and, to my surprise, found I was being provided for. I was able to identify an inner strength and peace that I didn’t think was my own. The other camp staff supported me when I needed it and I started to notice some changes in my campers.

I remember sitting at the table and one of the campers telling the other they were stupid and then another said,”Hey, can we not say they that? It’s not a real cuss word, but it sort of is and it isn’t nice.” He then mumbled something I didn’t hear about wanting to try doing something different for once. The other campers just sort of sat and thought for a moment about what he said. Some of the campers also began to help with the meals, serve the food, and carry things up and down the hill. They also stopped listening to Leon and didn’t want to do what he told them or follow him. Leon started doing things himself and even volunteered to help the cabin carry the food and water a few times. I think maybe they were starting to see a different way to relate to each other. Even more amazing was Friday when Leon got in an argument with another camper concerning a girl Leon was now talking to and the other camper was determined to fight him. Leon walked away. I couldn’t believe it. This was the exact situation he had been talking about the whole week and seemed to be a big part of his identity. Afterwards he was quite conflicted and said he wasn’t sure why he walked away. By the end of the week the insults, language, and yelling over each other to get attention were mostly replaced by conversation and laughter. Thursday evening, the cabin even joined in during fireside linking arms and singing with the rest of camp and then sat through listening to the shepherd.

By the end of the week, I was honestly sad that it was over. I had a lot of great conversations with the kids and felt like I got to know each of them a little bit better. Generally they came from tough situations and coped in a variety of ways. Some would follow whoever was in charge and settle into the role of the victim. Others would seek to dominate their peers and be strong enough to keep themselves safe. Still others wouldn’t say much and never let others get too close. The last few nights before bed were spent sharing life experiences and what we believed in. None of them appeared to have any strong faith in anything though some expressed they believed there was good and evil in the world as well as ghosts, spirits, and such. I told them that God made them, loved them, and wanted to know them and wanted them to know God. I also said that God wanted us to care for each other as we would want to be cared for.

I asked them during our last meal together how they felt about the week and they said they had a great time at camp and looked forward to returning. They also told me I was very nice and did a great job. This made me feel pretty good. They all got back on the bus and were smiling as they waved goodbye. I’m not sure where they are going back to, but I will look forward to seeing each of them again next year.

After the week I felt drained emotionally and physically but I was content. I realized looking back that the campers were usually respectful to me, even if they weren’t towards each other, and confined their more challenging behaviors to the shelter site.  I realized that I didn’t encounter anything I wasn’t prepared for or couldn’t handle. At the beginning of the week I couldn’t have imagined the tired contented happiness I would feel by the end of Friday. I’m looking forward to the next time I have the opportunity to be a counselor for a week. I know it will be another opportunity to invest in the lives of young people and I will grow as a person through the challenges.