It’s true. It’s open. AND, you get a $50 discount for registering between now and next Friday at noon. An automatic discount that is. More details here.

If you already know your sessions and dates, just go ahead and sign up!

Despite the snow on the ground and the fast approaching winter camps we are gearing up for another summer of fun, God, friends and nature. We’ve finalized the dates for SUMMER 2013, added a few programs to mix it up and will be ready to accept registrations NEXT Friday (Jan 18). Keep in mind, if you register within the first week of registration opening you’ll receive a $50 discount!

See the sessions and dates below and stay tuned for opening of registration, updates on new programs and the announcement of 2013 summer theme! Summer’s coming, are you?!

There’s not better place to be during the summer than BBC! Hope to see you on the hill:) 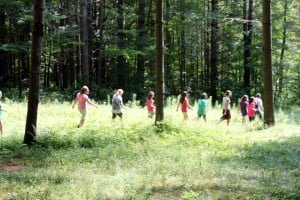 Tracks in the Snow

The hill is finally snow covered. Actually, camp is snow buried.  For those of you that have seen me at a snow camp, what I’m about to write might surprise you. My heart sinks when the snow starts falling. There’s no arguing the snow is beautiful. Clothed with adequate warm weather attire I love to go tubing, snow shoeing, skiing, snow painting or falling in the snow to make a snow angel. What I hate about snow is driving in it! I hate the fact that the roads I drive daily become unpredictable and dangerous. The additional travel time is detrimental to a chronically tardy person. I don’t enjoy the increase of blood pressure and white knuckles that are my body’s response to driving in the snow.

The other day I was lamenting all of the above as I watched Tuna drive away in inches of snow towards Killington. It’s so natural for Tuna to drive in the snow. As I pondered the many differences between us small indentations in the snow caught my eye. The indentations led straight to a tree. My gaze then caught another set of tracks. These were much bigger leading from the road to the woods. I was suddenly reminded that I am not the only one adversely affected by the snow. As the snow gets deeper moving around the woods becomes more challenging for some animals. The whereabouts of animals become more easily detected after a fresh snow fall. Despite the increased challenge, God gives these animals adaptations to make snow survival more possible. I was reminded of the adaptation God has given me in an AWD Subaru to get around in the snow. Despite my fear, I can usually get where I need to go in the snow.

I hope that someday I become more comfortable traveling in the snow but after 5 winters of white knuckled driving on the hill I’m not so sure I will.  At camp we often look around us to attempt to learn from nature. Seeing animal tracks in the snow reminds me that despite increased challenge, fear and adversity God gives each creature the resources required to live. (Philippians 4:19) God provides us with whatever we need to make our mission possible.

Come see for yourself, join me on the hill this winter for some animal tracking:)

Animal Tracks by the Tipi_Jan 13

I (Cheeks) took a few minutes to reflect on the past year. 2012 was another year full of learning and challenge. The various challenges and uncertainty left a lot of room for God to work. As God moved and worked here on the hill I learned a lot about prayer. All summer long we tell campers to pray when they are in trouble, when they are thankful, before meals and any time they want to connect with their Creator. We teach them a variety of ways to pray. We encourage them to pray for each other. Staff pray for campers all throughout the year. And yet this topic has alluded me of late. But as I reflected on 2012 the resounding theme was ANSWERED PRAYER. I was so aware of God answering prayers consistently throughout the year. Read on for my recollection of the top 5 answered prayers of 2012:

1. SNOW for SNOW CAMP: The week before Bobcat snow camp there was a vital ingredient missing: SNOW! I called my mom and told her we had no snow on the ground for snow camp and asked her to please pray for SNOW. I started planning for a snowless snow camp while praying snow would come. We could see grass on Thursday afternoon, but by Friday afternoon the hill was covered and night time sledding was a blast! I don’t know if God changed the weather pattern specifically for a BBC Snow Camp, but I learned to trust more in God as the snow covered the ground.

Lynx snow-campers with Marlin and Guppy in the middle. (This was just before we got the bad news from the fire marshal.)

2. SHEPHERD for SNOW CAMP: Two weeks before the 2012 Lynx Snow Camp camp was shepherdless. Person after person turned down the offer to come teach Jr High campers about Jesus. One night after exhausting the last person I knew to call I prayed – “God who will shepherd these campers?” The next day Marlin and Guppy called up saying they wanted to make room in their life to drive 12 hours both ways from VA – VT to help at a snow camp – did I still have any needs? YES! Marlin and Guppy shepherded for Lynx Camp and a good time was had by all. I continue to learn that God will bring people to do God’s work.

4. STAFF SHORTAGE: Going into March there were only a few applicants to counsel for summer 2012! We had recruited at colleges. We invited past staff to return. I had sent out emails. And still, the applications did NOT come. Finally, I committed staffing to prayer. Every day I diligently prayed for young adults to be drawn to BBC. By the end of March we had an excess of male and female counseling applicants. God does not always answer prayer on a timeline that I’m comfortable with but I’m learning timelines are overrated!

– MORE CAMPERS: We can only have camp if campers come. When it comes to camper attendance, “the more the merrier!” is always true. Since the end of Summer 2011 I had been feeling like camp should have more campers. At the beginning of 2012 I started praying for more campers. God, bring more campers to camp! And God did. One week God answered by having one camper family invite their entire basketball team. A worker at a social services agency used to attend BBC as a kid so she sent every camper she could. Word got out. BBC was the place to be this summer. Camp saw over a 12% increase in camper attendance during the summer of 2012. God brought more campers and through each one, more of himself.

Join me in praying for BBC in 2013. Don’t be surprised when God answers.